I currently do not have any older dogs requiring a forever home. 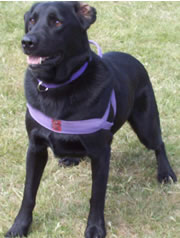 I would like to take this opportunity to tell you about my dog and how we came to be involved in Flyball.

I actually bred Cameron myself (a black Labrador) along with his 7 brothers and sisters and they were all sold at 8 weeks of age. The people that bought Cameron were a mature aged couple. Everything seemed right at the time. Yes they had owned a Labrador before and yes he would be allowed in the house.

12 months later we received a call from them. Could we please come and collect the dog, he was neurotic and paranoid and their vet had advised them to have him put down.

Well hold on a minute. Of course we will always take our dogs back but before we go to any of these drastic actions let's try to resolve the problem first.

"Well the fact is it isn't really worth it. We're going on holiday overseas for 10 weeks and for the cost of putting him in boarding kennels we thought we would just buy a new pup when we got back."

Fine we'll be there to pick him up this weekend!

He was neurotic and paranoid and grossly over weight. I took one look at him cowering away from me and thought what happened? And what am I going to do with him? I remember driving home and thinking maybe the vet was right.

It took only a few days for him to start trusting us and getting used to our lifestyle. At the time we were extremely busy with other projects. We had newborn puppies, and were obedience trialing and training our own dogs - Cameron had to learn to fit in. And he did. We learnt quickly that Cameron does not like to be ignored.

Once we had gained his trust it was time he started school and socialising with other dog's and people. This was where my Mother stepped in. She has to be the most patient (or stubborn) person there is. Tell her this dog can't be fixed and she will show you it can.

To start with all she did was walk around the edge of the obedience classes not actually entering in the class. Every time anybody tried to approach him she would tell them to ignore him, he had to find his own feet. If he panicked at something she just acted like it had never happened.

By 6 months there was a huge improvement. He had lost all the excess fat and was much fitter. He was also able to be part of the obedience class, although he still baulked at any form of contact from strangers. 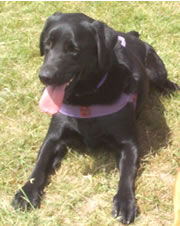 It was at this time that our club had a visit from Eric van Zuyden, Nicole Kendt and friends from the AFA. They were giving us a Flyball demonstration and some tuition. We had brought Cameron along for the socialisation.

It was never our intention to try him at Flyball. But it soon became obvious Cameron had other ideas. When he saw the other dogs playing with tennis balls it was just too tempting and we soon realised we had found a bargaining tool. (He had to face his fears if he wanted that tennis ball.)

With the help and support of his fellow teammates, and the sport of Flyball it didn't take Cameron long to get over the majority of his fears - after all there was more important things to worry about - like getting that ball !!!

Cameron has now achieved his FDX title and is on the way to achieving his FDCh. He has also taken on the challenge of training for the obedience title C.D. This is proving difficult, as there is a Stand For Examination involved. Of course it doesn't help in training when the Flyball equipment is set up a few feet away screaming out for a good time to be had by all!. Cameron will suddenly dash off from a sit stay unable to control himself any longer . I just laugh.

After all Cameron wouldn't be the dog he is today if it wasn't for Fyball !