DO NOT OVER-EXERCISE YOUR PUP.

Puppies bones are very soft and grow very fast (particularly the males), so too much running around may damage them. Also discourage your pup from jumping. This can be bad for its joints and may cause injuries to them. You need to be careful until the pup is at least seven months of age.

A GOOD RULE IS: A LITTLE PLAY FOLLOWED BY A BIG SLEEP!!!!

Pups of all breeds need lots of sleep and the rule of thumb should always be if a pup wants to lie down, then they should be allowed to do that. Playing in the back yard on there own is fine, for the pup will give up when it has had enough. When this happens accept that the pup needs to rest.

The problem comes when we are taking our dogs for a walk on the lead. All retrievers, ie: Labradors, Goldens, Curly coat's, as well as Setters, Boxers, Shepherds, and all other large breeds need to be exercised with much more care, as they go through growing surges where their long bones grow at one rate but their muscles take time to catch up. When this is happening their joints are at risk. So it is a good idea to put down some sort of regime.

THINGS YOU NEED TO KNOW TILL THE DOG MATURES

Remember this is not the only exercise the pup gets. He/she will be playing in the back yard as well. 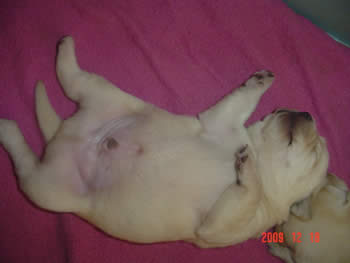